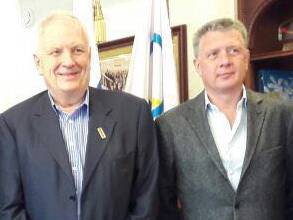 Mr. Svein — Arne Hansen, President of European Athletics came to Moscow with a two days visit and met with leaders of the Russian sport.

On the first day EA President met with Mr. Vitaly Mutko, Minister of Sport of Russia. Minister told EA President about the activities directed to restoration of trust towards Russia in connection with violations of the anti — doping rules, that took place in Russia. Svein — Arne Hansen mentioned that he understood the complexity of the current situation and suggested a number of recommendations on how to overcome it.

On the second day Svein — Arne Hansen met with Alexandre Zhukov President of Olympic Committee of Russia. It was discussed during the meeting, which measures have already been taken by the Russian side, so that Russian team could take part in the Olympic Games in Rio. On the same day EA President visited the office of the Russian Athletics Federation and met with its President Mr. Dmitry Shlyakhtin and with coaches of the Russia National teams. At all meetings Svein -Arne Hansen was accompanied by Dmitry Shlyakhtin, Mikhail Butov RusAF General Secretary, and Christian Milz EA General Director, who came toMoscow together with EA President.

EA President said that the visit was useful for himself, because he wanted to make sure, what steps were made in Russia for eradication of doping. Hansen mentioned that after he met with leaders of Russian sport and with coaches of the National teams,he clearly understood the level of a very comprehensive work that Russia was doing in order to improve the current situation.